The benefits of Negative Ionization

A strange dry eyes that obscures the view, a feeling of suffocation due to the stale air that loosens concentration, a slight headache that makes you nervous: these are some discomforts that we may experience after a couple of hours spent in crowded rooms or enclosed areas such as office, perhaps at computer monitor, in a library to study, in the passenger area if we travel a lot for work. Symptoms that push us to look for a bit of relief, to immediately open windows or go out for a breath of fresh air. And then we feel better.

This malaise is caused by many indoor volatile substances harmful to health, such as those produced by the dust in the screen of the TV, by home appliances, laminated furniture, by air conditioning and by smoking: all factors that destroy thousands of negative ions, gaseous air cells delegated to the maintenance of physical and psychic balance, abundant however in open places especially in high mountain’s forests.

For regenerating ourselves and batten down the hatches against abnormal conditions caused by the lack of negative ions, we can take advantage spending a little more time in the open air, where indeed these fondamental cells are numerous and useful for preserving the health.

What is the ionization 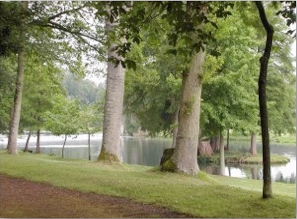 Since ancient times, scientists, doctors, biologists, physicists and chemists have studied the phenomenon of ionization scientifically proving its wholesome effect on the human body.
The ionization is a physical process, natural or artificial, which releases enough energy to dissociate an electrically neutral molecule into two parts called ions, providing them with a positive electric charge (positive ions) or negative ones (negative ions).
The terms positive and negative differ only in the polarity of the ions, because in reality their effects on the body are the inverse of their sign: positive ones are generally considered to be harmful to health, while negative one are healthy and also called vital or air’s vitamins.
Indeed, the negative ions are healthy because they are generally made up of oxygen molecules that invigorate body and mind. In particular, they act on inflammatory forms, insomnia, muscle pain, depressive states, asthma; they also improve circulation, promote calmness and concentration.

In addition, negative ions reduce the levels of serotonin (a neuro-hormone causing physical and psychological disorders like stress, tension, irritation and anxiety) because they promote relax and serenity.

For keeping our physical and mental health, an optimal balance of positive and negative ions must be mantain in the air: getting out from indoors and taking a deep breath are the best way to increase the health of body and mind.

How to benefit from 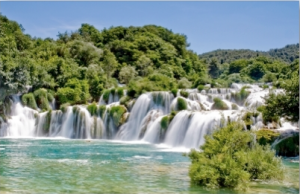 Negative ions are absorbed by our body through two channels: the air and skin. In the first case, the ions enter in the body through the lungs and oxidize hemoglobin (the protein wicht caryes oxygen from the lungs to the tissues), thereby improving the oxygenation of the blood. In the second case, the ions are absorbed through the nerve endings under the skin, that act as receptors.

To enjoy the maximum benefits by the negative ionization on our organism, we need to be outdoors as much as possible. However, it’s necessary to carefully choose the areas where we can rejuvenate breathing clean air: these should be out-of-town, far at least for about 1 km from areas that modify the natural atmosphere, such as near industries, airports, electricity wires, antenna towers, chimneys, etc.

In particular, an abundant presence of negative ions is found in high mountain’s forest, at the waterfalls, on the edges of lakes, the cliffs and in the waves of the sea.
We can tank up of ions even lying down on a lawn, without doing special exercises or limit exposure time.

Recharge ourselves in the woods 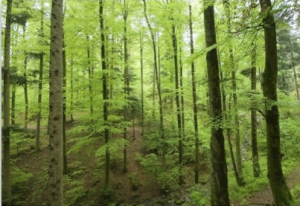 One of the richest places of negative ions is the high mountain’s forest, because of its dense and varied vegetation. It’s easy, in fact, walking in the woods, to be enveloped in a pleasant atmosphere, almost heavenly, and be more in touch the deepest part of ourselves. In order to find inner peace and well-being, now we can do trekking adventure in the tropical forests or even mystical holiday in shelters around the trees.

We can enjoy the woods’ care at all times, although the ideal time is after a storm: for the presence of lightning’s electrical discharge, the concentration of negative ions is higher and not surprisingly we feel a general sense of well being and relaxation after.

We can enjoy these moments being alone or in company, even if the silence is the better condition for meditating and contacting the deepest part of ourselves.

Staying in a forest, in addition, we also absorb green plants’ energy. Their beneficial energy restores inner balance momentarily lost, because it brings relief, fights stress and lack of confidence in ourselves or in life, the bad mood. In particular, the pine guarantees a full vitality.

However, we can have beneficial effects on the body even stronger, doing the following two exercises. 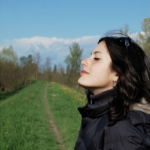 Controlled breathing exercise: breath slowly and deeply through your nose and then exhale through the mouth. It’s recommended to repeat this exercise for 5 minutes and, if you do not accuse disorders such as dizziness, 4-5 times.

With this exercise, which should be performed for about 30 minutes, you must first choose an “own plant” which attracts you most.

Once identified, sit with his back against the trunk and legs stretched out; then resting his left hand open on the roots to absorb the energy from the tree and the right hand on the heart to receive and distribute it throughout the body. Close your eyes, leave aside all thoughts and try to listen very carefully to the sounds around you, especially those who come from the tree itself.

Breathe in slowly and deeply through your nose and then exhale through the mouth. Visualize your body starting from your feet, trying to feel his warmth and blood circulation, at the same time imagining that in my veins flows the sap of the tree. Relive all the organs in this way until you get to the head. Will probably feel a strong sensation of heat, a spa and a deep peace and the body which is already more harmonized.

View all brunch offices Please, fill the form for info, appointments and expert advices: We will contact you as soon as possible.